Peaky Blinders, is it History vs Historical Fiction? 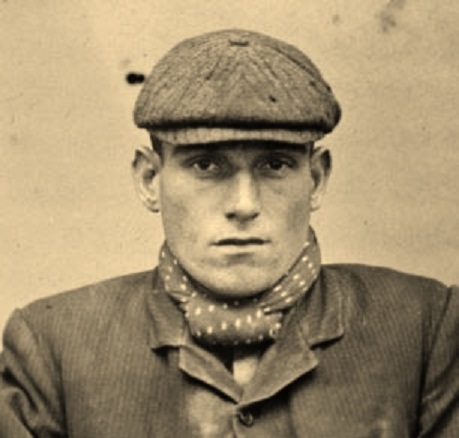 Stephen McHickie an actual Peaky Blinder. This the police photograph when he was charged with breaking and entering on October 24, 1904 in Birmingham, England.

Please enjoy some background music while reading, turn up your speakers and press play button below:

The BBC Series- Peaky Blinders tells us much about ourselves. This well-crafted historical fiction is found on BBC2, available via Netflix for American audiences, and stars Cillian Murphy. Entering its third season Peaky Blinders hits all the pleasure centers in the right order for an addictive viewing experience.

Peaky Blinders created by Steven Knight and set in post-World War 1 Birmingham England, succeeds in stupefying its audience with edgy rock music and naked violence. None of this should surprise an American viewing audience as it is the standard formulation for commercial success—sex, drugs, and rock ‘n roll. Tilly Embling of the Manchester Historian captures this same sentiment, “The drug, alcohol and violence fuelled hedonism of their business all makes for a fantastically watchable program.” Thankfully, Knight reduces the story to bite-size chunks that the audience can quickly ingest while advancing the story.

I am not here to pass moral judgment upon such an intriguing piece of historical fiction, but instead to discuss why Peaky Blinders wraps itself so tightly in the thick fabric of history

Audiences want a foundation, a baseplate if you will, upon which to seat the story in their minds. Peaky Blinders does this by providing numerous historical elements, while not overwhelming the audience with boring details. For lack of a better word, the creator of Blinders kept the sexy details, grittiness, grays, and sweat, while not explaining the entire context. Stuart Jeffries of the UK Daily Mail compared the visuals to Blade Runner—need I say more?

Dr. Chris Upton, reader in Public History at Newman University, as historical advisor helped create this visually stunning environment with period newspapers, soap, and cigarettes for the characters. http://theconversation.com/how-peaky-Blinders-made-1920s-brummies-hard-but-hip-32252 Though this well-crafted stage certainly enhances the story as it unfolds, it is just that, a story, Dr. Upton readily acknowledges. One of Upton’s West Midland peers, Social history professor Carl Chinn- University of Birmingham points out that the actual Peaky Blinders were long gone by post-World War 1 and never worthy of the public’s respect

This video illustrates many historical errors that could keep each side slinging mud, similar to historians taking apart the movie Braveheart. This group could include historian Philip Gooderson, who wrote extensively on the gangs of Birmingham, but not consulted for the production of Blinders:

“’Having spent much of my life researching about gangs and Peaky Blinders it was a bit of shock to suddenly see a TV drama about it,’ said Philip, who lives in Manchester.” (Emma McKinney, Birmingham Mail).

Historical fiction: A substitute for history?

Certainly, there are those out there who would say that there is little to no difference between historical fiction and history, and to some small degree they would be correct: all findings are subject to bias. However, what happens when no one agrees upon a narrative of events or the facts? Does history then become a hodgepodge of mush?

When I as a historian take a given event, consider it, create an idea, argue to support it, and then explain why it is important through the lens of my time, do I not become a fiction writer in a small way? The rub for many historians is that we like to think of ourselves as objective and non-fictional in nature.

At the same time, the fiction writers introduce their own bias as Professor Steven Fielding- University of Nottingham explains how selective use of history in historical fiction reveals much about ourselves:

“Dramatized visions of Britain’s past are usually about as historically authentic as a nine bob note, and Peaky Blinders is no better a guide than is Downton Abbey. But period dramas do give an insight into the kind of historical myths that resonate with contemporaries, fantasies that change with the times in which the dramas are produced.”

So, both the historian and the fiction writer introduce biases, one unintentionally and the other deliberately.

Do we want to be entertained, re-live history, or both?

Perhaps, we as historians defend our trade as we see historical fiction as a direct challenge in our role as defenders of the “objective” historical narrative. Imagine you are a fiction writer who walks up to a mathematician at a large blackboard and says, “Okay, this looks good, but here, in the middle of this equation I would like you to replace this with this more interesting symbol.” Of course, the mathematician would say, “That’s wrong!” to which the fiction writer might say, “Yeah, but it makes for a great story!”

That is what disturbs us as historians, that replacement of parts of the equation to make it prettier. Our task in the defense of “objective” historical narrative becomes even harder once one admits to one’s own introduced biases.

I suspect and hope that very few historians have the fantasy that they are defending the absolute “objective” narrative, but instead are aware of their own biases over time. So instead of backing ourselves into a corner as historians with absolutes we might look at the difference between historical fiction and history as one of degree: one as a deliberate act and one as a side effect of analysis.

Maybe, historical fiction writers believe they need to pretty-up the historical to make it more appealing to a more general audience, much to the bewilderment of historians.

Professor Henry Louis Gates, Jr- Harvard University says as much by pointing out the degree to which one film fictionalizes history Django Unchained versus another 12 Years a Slave:

“This aside, Gates is a big fan of Tarantino's Oscar-winning film, which he calls the ‘best post-modern Spaghetti Western film about slavery’ ever mounted. ‘You can't teach history through Django, though,’ Gates concedes. ‘But any professor could have a great class with Django contrasted with 12 Years a Slave. It is an accident of history that the two were released within 12 months of each other—a delightful accident.’”

Peaky Blinders much to its credit successfully mixes history, gangs, drugs, sex, and a killer soundtrack, resulting in a compelling drama.

With that said, here are four questions to consider-