What happened during his service… 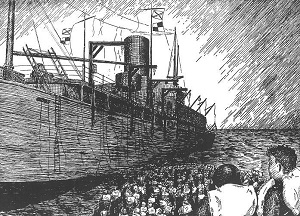 What the person needed:

Lynne was trying to discover the name of the ship her father was in that went down in the English Channel during the Second World War. Her father survived the sinking but never spoke about the ship that a German torpedo sunk. Interestingly, her father told her that he lost his engagement necklace when he went into the water while trying to get away from the sinking ship.

How I satisfied that need:

Finding the records for her father's unit, the 360th Harbor Craft Company, Transportation Corps, United States Army, was quite a bit of work. We were looking for that Army unit crossing the English Channel on a particular day.

I found the ship, it was the HMS Empire Javelin, a British flagged, Dutch Vessel, operated by the United States Navy.


For Memorial Day I shared some of the info you gathered about my dad's service with others in the family. Everyone was so glad to hear the story and all are interested in the narratives. Thanks again for such a detailed chunk of history."

​For more information on the Empire Javelin see